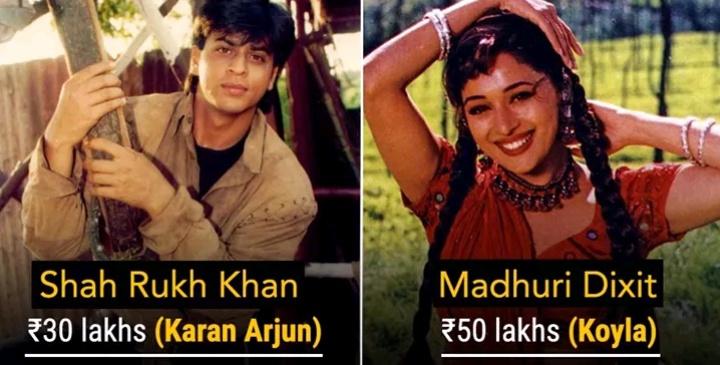 1.₹3 crores is how much Amitabh Bachchan charged per film after Khuda Gawah released. Back then ABCL (Amitabh Bachchan Corporation Limited) had him on a one film per year contract.

2. In 1995, Ajay Devgn did movies for ₹70 lakhs. He had four releases that year, most of them didn’t work at the box office.

4. Sunny paaji was the most bankable star after Gadar and Ghayal. He charged over ₹50 lakhs for Rajkumar Kohli’s Jaani Dushman. But soon after, his fee was hiked to ₹60-70 lakhs.

5. Suniel Shetty charged ₹30 lakhs for Rajkumar Kohli’s Jaani Dushman. He and Sunny Deol were said to be bankable and worth it.

6. 1995 was the year Shah Rukh Khan delivered Karan Arjun and Dilwale Dulhania Le Jayenge. Back then, his fee per film was ₹30 lakhs and we saw him do Dil Toh Pagal Hai, Koyla, Pardes and Yes Boss in the coming years.

7. After movies like Mohra, Akshay Kumar charged ₹55 lakhs for a movie. Back in 1994, he had 12 films in his kitty. Some things never change, do they?

8. After films like Darr and Hum Hai Rahi Pyaar Ke, Juhi Chawla charged a fee of ₹20 lakhs per project.

9. After giving borderline-revolutionary performances in Tirangaa and Krantiveer, Nana Patekar hiked his fees to ₹50 lakhs.

It’s also interesting to note that Nana Patekar has been known to donate 90% of his salary to charity. We’ll have to say, the human in Nana is just as good as the actor in him.

Well, these actors have come a long way from earning in lakhs to scaling new limits in crores.