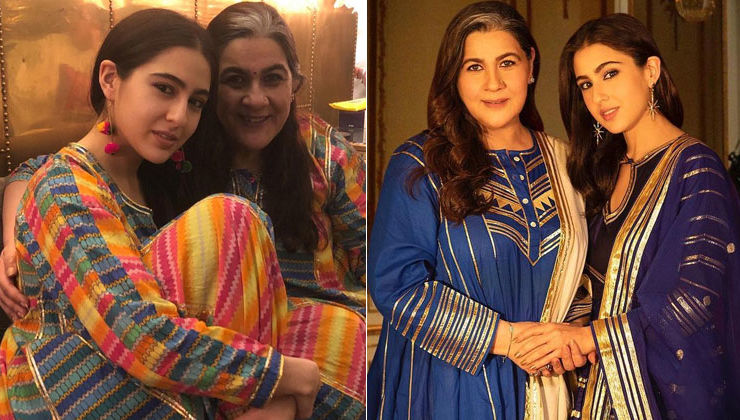 Sara Ali Khan is gearing up for the release of her next film, Atrangi Re. In this film, Sara will be sharing the screen space with Akshay Kumar and Dhanush for the first time. Coming back to the young actress’ personal life, she is very much attached to her mother Amrita Singh. In a recent interview, the Simmba actress opened up about how she draws her strength from her mother. Sara also shared that her mother is the solution to all her problems. Speaking about how her mother has been through a lot in her life, Sara told IANS, “I think she has gone through so much more than I have in her life and if she can walk the way she does with her head held as high as she does as her daughter, then I would be worthy of your compliment.”

Sara is mama’s daughter and just like all of us, she thinks her mom is the solution to all her problems. The actress also credits Amrita for helping her have a positive outlook towards life. “There are days when I don’t feel positive. It’s normal. That is the part and parcel of life but I think I have a great mother and I think she is the solution to all my problems. With a mother like that, it is impossible to be any less than positive,” the Kedarnath actress told IANS. On the work front, Sara will be next seen in Aanand L Rai’s Atrangi Re. Apart from that, she also has The Immortal Ashwatthama in her kitty. The actress will be pairing with Vicky Kaushal in this sci-fi film.

Daughter of Saif Ali Khan and Amrita Singh, Sara Ali Khan is quite the news…

With regards to 'nazakat' otherwise known as elegance and appeal, Sara Ali Khan has consistently…

From ‘fat to fit’, Sara Ali Khan’s transformation tale is truly an inspiring one. But…